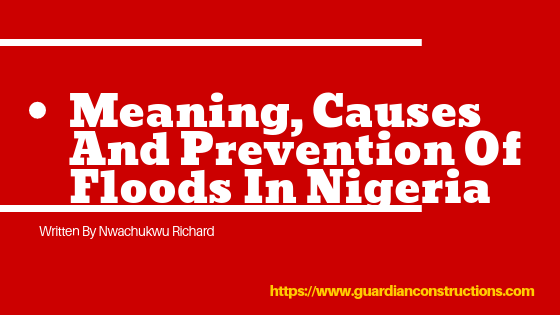 I am a Nigerian, this is no news! Its also not news that a great part of most Nigerian states gets submerged in flood when it starts to rain real hard from the months of  July, August, September, etc. Now on this blog i am going to talk about floods, the meaning of flood, causes and 10 smart prevention to flood.
Lets talk about floods!
What is Flood?
A Flood is an environmental situation that occurs when water overflows its boundaries, covers an area and this usually happens when the magnitude of flow of water exceeds the water carrying capacity of the river banks, dams, soil, name it!
What Causes Flood?
Flood is caused by a great number of factors but in this context, i am going to list just a few of these contexts.
Causes of flood includes and is not limited to:
1. Heavy rainfall, sudden release of water from dams, etc
2. Prolonged rainfall which results to more surface water since the water infiltration capacity of the soil must have been exceeded.
3. Another cause of flood is a reduction in the carrying capacity of river channels as a result of accumulation of sediments.
4. Blockage in line drains as a result of poor waste management systems
That is enough now, flooding is not a good thing since it makes people lose their homes.
Lets talk about the preventive measures to Flooding
Do not forget that flooding is one of the factors you should consider when renting an apartment in Nigeria
How can Flood be Prevented?
If your search is How can flood be prevented, then you’re right to be here at this time.
You see, i have looked around the streets, my street inclusive and after a thorough study, i realized there are a lot of things that are really wrong in the streets and thus the reason why we’re so ravaged by flood every year.
i am going to list a few ways through which flood could be prevented here!
1. Environmental Sanitation
Environmental sanitation is one good way to prevent flood in the streets. It ensures that the drainage channels are kept clean in such a way that when the rain comes, it’ll be able to find its way to the rivers, lower portion of the terrain leaving those in the uplands in peace.
2. Construction Of A Good Drainage system
This one other thing i find lacking in most most Nigerian streets. You see, there is no proper drainage system in Nigeria. Even the existing ones has been neglected for too long, no proper sanitation and as a result, clogging, blockage and thus, flooded streets.
Drainage systems are designed with the sole aim of artificially removing surface water that could not infiltrate the soil. Constructing a functional drainage system is one natural way of controlling flood but when it is lacking in most Nigerian streets, the results is no other than flood.
3. Create More Wetlands And Encourage Aforestation
Reforestation, afforestation are both good, they help to reduce the impact of flooding as well as help sap the excess of carbondioxide which builds up as cloud in the skies that later fall back to us as rain.
Reforestation must be encouraged in Nigeria and the world around if flood is to be prevented from hitting the world around. this is another great way of preventing flood.
Difference Between Mortar And Concrete
4. Construction Of Dikes and Levees
Just in case you’re wondering, dikes are flood control structures. they exist to ensure that water surges and river flooding is blocked.
5. Converting Rain Water To Usable Water
This requires that water collection (with run-off water inclusive) actions be taken across the states which ensures a large percentage of surface water and run-off be collected and subjected to further treatment.
After treatment, such water is usually made more useful and also, the collection means no more flood across the streets since the water is collected and stored on reservoirs after which they’re moved to treatment plants for further purification processes.
How to Design A 2 Way Spanning Slab
There are really a lot more i want to say about floods, causes and prevention but then, let me stop here for today!
Please do share with others as well!
Share on Social Media
telegramtwitterfacebooklinkedin