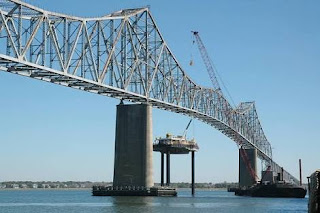 Have you ever come across the word “Load”? Do you ever wonder what it means when someone, maybe a lecturer mentions Design load or similar terms such as Live loads, Dead Loads, etc? It is a post about Top 5 Loads in Every Civil Engineering Structure

Well, worry no more because on this post, i am going to explain each one of these loads as it applies to Civil Engineering Structures.

Here is a list of 5 most common loads that exists in  and affects every Civil engineering structure.

What Are Live Loads?

A Live load is simply put as those downward forces on a civil engineering structure (could be a building, bridge, etc). live loads are also regarded as moving loads.

In a building, Live loads are best described as comprising of the weight of the occupants, possessions of occupants of a building which may include such things as furniture, electronics, Books, just name whatever has weight in your house.

In a civil engineering language, Live loads are also known as imposed loads.

See Also:  Which Is The Best Soil For Filling In Building Construction

What are Dead Loads?

In a civil Engineering term, a dead load is simply a downwards force that acts on a building as a result of the self weight of the building. This self weight is composed of the weights of all structural elements in the building eg facades, walls, roofs, beams, etc.

What are Varying Loads?

A Varying or Dynamic load is simply defined as that load created by traffic. It is common with traffic structures such as Bridges and may comprise of braking and acceleration loads

What are Wind Loads?

Wind loads are 4th of the 5 loads that affects civil engineering structures. It is highly considered in High rise buildings like Sky scrappers or buildings with large surface areas.

See Also:  Load Bearing Masonry Construction - Why They're Fading Away

What are earthquake Loads?
These is a load caused by the horizontal forces on a building. The earthquake exerts this shaking effect on a building and so for this alone, it is required that buildings constructed on earthquake prone areas be designed for higher resistance against the effects of the earthquake.

Well, here are the Top 5 Loads In Every Civil Engineering Structure. I hope you can further look into this as i believe its quite easy to comprehend