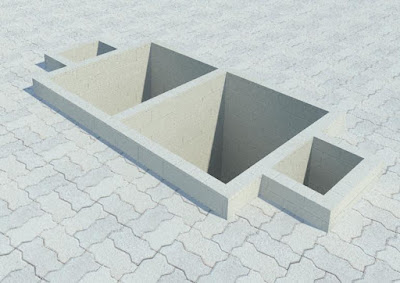 Over the past few weeks, I realized a lot of people really would love to know what the parts of a septic system are! Because of this, i have decided to create one of the most comprehensible contents on the subject matter. Perhaps, knowing this would help you understand why it is very important to always ensure the services of a professional is highly required whenever septic systems are designed!


Before anything on parts of a septic system, it could be remembered that guardian constructors have in several previous posts, explained what a septic tank is as well as how septic tanks work. But for the sake of our new readers, we shall leave a quick explanation to some of the important aspects of the subject matter

What is a Septic System?

Parts of a Septic system

In most cases, there are 4 major parts of a septic system and these we shall discuss below with accompanying diagrams!
1. Piping Network
2. Septic tank
3. Drain field and
4. The Soil

The Pipe as one of the parts of a septic system ensures wastewater is collected from the home (Kitchen, bathrooms) to the septic tank which is buried just outside the home. However, the pipe also conveys treated waster water from the septic tank off to the drain field where these are discharged to the environment.
The pipe is therefore the starting point of a septic system and also ends it since the drain field comprises of perforated pipes who discharges treated wastewater to the surroundings!

The Septic Tank as one of the parts of a septic system first receives the wastewater as ushered in by the pipes. As these wastes collate, they are gradually segmented into the scum, effluent, and sludge.
While the sludge which comprises of oil and grease floats at the very top of the septic tank, the effluent on the other hand is the middle section which is water.
The scum (First layer) and the Effluent (second layer) are, however, prevented from leaving the septic tank by a specially designed T-shaped pipe which serves as the outlet.
Also within the septic tank is the Sludge layer which i would say is the total collection of all solids that are denser than water, thus unable to float or flow. They are retained at the bottom of the septic tank and remain here till they are pumped out. Thus, when you begin to notice the septic has started to develop some smell or show signs of malfunction, then it might be due for pumping.

Parts Of a Septic Tank

Recommended:  Cost Estimate For Construction Of Septic Tank In Nigeria

Drain field One of the Major Parts of a septic system 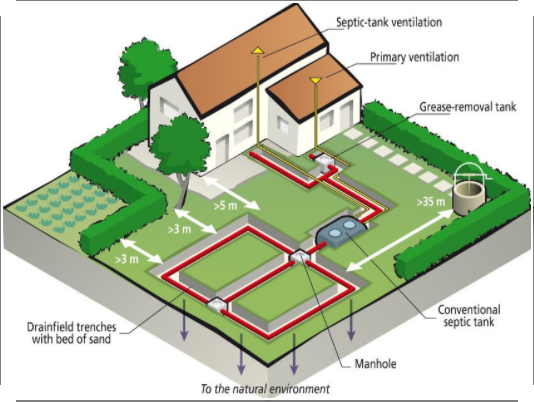 Call it a drain field or leach field, this is one of the major parts of a septic system that does the secondary work. Depending on the number of occupants, after a few months of designing your septic system, the drain field starts to function. It receives treated water and through perforated pipes, these are discharged to the earth where microbes and bacteria are surely going to act and use these to enrich the soil…

What is the best soil for septic drain field construction?

This is one aspect of septic system construction that musty never be taken for granted because a number of recent studies have shown that the type of soil used often affects the level effectiveness of a septic system.
It is important to pay a more than usual attention to the major properties of soil (Structure, Drainage, and Texture)

When we consider soil structure, it is required that soils used for septic systems have large pore spaces between the grains and these spaces must be highly interconnected in order to make it for natural processes such as Drying, wetting, and Thawing to take place.

Soil Texture
Aside from having large pore spaces, soils used for septic drain field design are not required to have too much clay or silt present.
This is because too much clay makes the soil too heavy while soils having too much silt really have fewer pores to allow drainage of soil water.

Soil Drainage
When soil drainage is poor, it would be somewhat difficult for treated wastewater to percolate

Popularly referred to as soil drainage, is the ability for water to naturally drain water from the area. It is therefore required that Soil moisture content tests be carried out to determine is resident or alien materials would be used for the construction of a septic system.
Recommended
Recommended:  Tutorial: How to Clean Septic Tank Naturally
From the above therefore, it is possible to say the most suitable type of soil for drain field design includes:
Soils with low clay content
Sandy soil (level of sandiness must supersede all other characteristics)
Soils with Non-Retentive or Non-Absorbing ability
Grounds with low clay content
Conclusion
In conclusion, There are 4 major parts of a septic system without which the system cannot function properly. However, it is very important that a few of these parts also has other parts that enables them function properly.
For instance, the Septic tank is that major parts of the septic system that may not function properly without the Filter and pipe networks.
Also, the Drain field is a system on its own that requires proper soil analysis and the accuracy from the hands of a professional in order to function effectively.
From the study, we also identified the soil as another important part of a septic system since a soil with little pore spaces may not favor the percolation of wastewater.
We also picked most suitable types of soil for the construction of septic systems and drain field include;
Soils with low clay content
Sandy soil (level of sandiness must supersede all other characteristics), etc

This is it on the parts of a septic system!

I look forward for your comments and criticisms. However, if you find this page good enough, please share with others as they may be looking out for the best and most comprehensible article focusing on parts of a septic system.