The young man you’re seeing is a craftsman.

Today he made over #10,000 just fixing keys to doors in one of the sites I’m managing.

And that’s how they make their money.

On another site, I have Mr Pedro who has been contracted to handle all tiling jobs for the entire building.

I asked Mr Pedro how long its gonna take him to complete the job, he promised to hand me the keys in 5 days.

So in 6 days, Mr Pedro would have earned 210,000 for himself, I supply the water he needs, I provide all the necessary materials needed for the job.

He’ll earn #210,000 for the things he can do with both his hands, all he came with was a tape and a piece of paper, he’s also currently on site, but the most Important tool he wields is his cutter, spirit level, a Pincer, chisel, shovel and his working clothes. 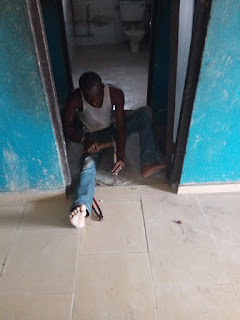 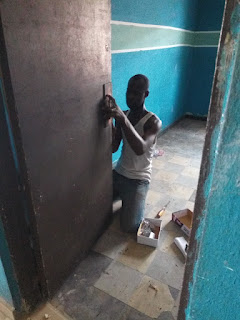 Now this is why I’ve been saying you’ll earn more when you have more skills than a degree.

The guy on the pics is an ND Holder, today he made some #10,000 tomorrow I will use him again and pay him almost the same amount.

Adding that up, he would have made some #20,000 in 2 days. How much does an average worker make in a month?

Some white color jobs won’t even pay you up to #85,000, yet its what we read for, fight for, drink garri for, we even sleep under the cold wind at night just to grab this certificate.

To me, I think vocation is still the best no matter what. Even if we’re gonna be offered some paper called certificate, let’s also bag some skill along with the degree.

Degree is good, but you’ll earn more with a skill. The white people that are guarded with 4 armed men, carried on a fully air conditioned hilux, treated like some god don’t even have a degree.

See Also:  How Much Does It Cost To Repair Or Replace Your Septic Tank and Drain field?

They’re white, yes but all they have is some 6 months certificate on a particular skill.

Let me go an bathe now, work was fine today
I hope you learnt from all these?